We haven’t written in a while, and, as a consequence, there is plenty of news that we would like to share.

Don’t worry: We will still provide plenty of technical insights on requirements and Eclipse in this newsletter.  But we also want to tell you about our new product, Axiom, which we launched this week.

We announced a while ago that we were working on an extension to support the exchange of requirements between two parties.  We are now making Axiom, a component for ReqIF exchange, publicly available.  We would like to thank all the beta testers who provided us with valuable feedback.

You may wonder what the problem is we’re trying to solve. After all, formalmind Studio uses ReqIF natively, and even makes creating ReqIFz-Archives easy.  The problem is that a regular exchange needs an intelligent update.

When multiple parties collaborate, it is usually clear what part of the specification each party is working on.  For instance, the manufacturer is typically in charge of the requirements, while it is the role of the supplier to provide comments, or even to create a functional specification (Pflichtenheft) that outlines the implementation approach.  But concurrent work on the requirements is only possible if the various pieces can be merged together correctly.  In the animation above, the manufacturer may have changed the requirements while the supplier was commenting on them.  Therefore, they want to merge the supplier’s response, rather than overwrite everything indiscriminately.  Axiom makes this possible (Click on the animation to learn more). 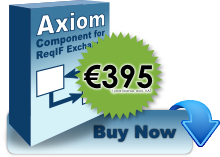 The automotive industry even published a process for this scenario, the HIS exchange process.  It outlines some of the issues that you may encounter when sharing requirements.

formalmind Studio will always remain free, and we will continue to improve ProR, the open source tool that it is based on.  But in addition to that, we now started to develop specialized components for industry that are for sale.  Axiom is the first such component.  It is available immediately in our online store.  If you buy before December 31st, 2014, you can take advantage of our special introduction price and save 100.

Hussein Mhanna has been contributing to RMF for a while, as we mentioned before. He also authored the CSV Importer, that we describe below.  In recognition of his contributions, he officially became elected committer of the Eclipse RMF project on November 17th 2014 – congratulations!

Many times we got the request to make it easier to get existing requirements into ProR / formalmind Studio.  It is little comfort that it’s possible to import, say, Excel into DOORS®, and then to perform a ReqIF export, which in turn could be read by formalmind Studio.  Not many users have access to DOORS® or a similar tool.

The answer is a CSV import.  CSV is simply comma-separated data.  You can export CSV files using Excel, for instance.  In other words, if you can convert your requirements to Excel, you can get them into formalmind Studio.

The CSV import adds the content from a CSV file to an existing specification.  Therefore, you first need to create a ReqIF model.  Then you can initiate the importer via File | Import… | ReqIF | CSV.  You need to select the destination file, and there are a few options to tailor the importer, e.g. whether the first row contains headers or not.

The next step concerns the mapping.  Each column needs to be mapped to an attribute, consisting of name and type, as shown below.  Hitting finish will complete the import. 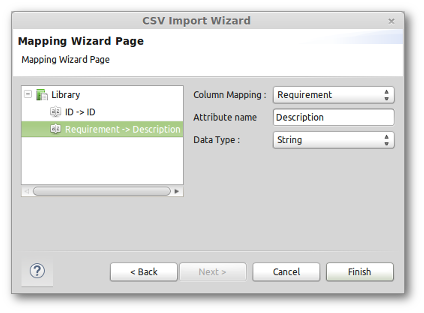 We described the use of this feature in detail in the Systems Engineering Handbook (Section 2.3) that we’re developing in the open se-teaching.org project. We’d like to say thanks again to Hussein for implementing this feature.

New Release of RMF at Eclipse

And last, we will create an official Eclipse release RMF this week, which is mainly relevant to those who consume the project directly from eclipse.org.  For formalmind Studio, we usually work with a stable snapshot, so that you can always take advantage of the latest features.

We hope that all this news is good news to you, and that you will put the new features to use.