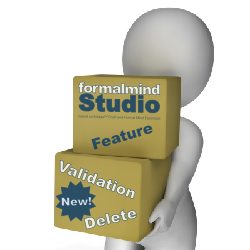 We announced a number of new features in ReqIF Studio right before Christmas, including better SpecRelations (linking), Validation, ID-Generation and a few more. But we did not stop there, but continued our work. Read on to learn what we added. But first…

Dr. Michael Jastram will talk at ReConf 2016, together with Dr. Andrea Herrmann, on the ISO 29110 standard. This standard is intended for small organizations that perform systems engineering. You can take advantage of the early bird discount for ReConf until January 29.

We already mentioned our new German-language blog, Systems Engineering Trends. Stories since our last newsletter include:

If you speak German, please check it out, and please forward this to interested friends and colleagues. Visit SE-Trends >>

When using a tool like DOORS, things are easy: You delete, a requirement, and it is gone. But ReqIF allows requirements to be referenced multiple times: Change it in one place, and the changes are automatically visible everywhere where it is used. Today, this feature is rarely used, but we expect usage to grow.

As this behavior significantly differs from the old behavior, the first time you delete a requirement you will get a warning as shown here: We also improved Consequent, the ReqIF validator that is built into ReqIF Studio. Until now, error markers were only shown in the textual representation of a faulty ReqIF file. But now problems are also shown in the margin of the specification editor. When you hover over the marker with the mouse, the error message is shown. Of course, this only works for those elements that are shown in the Specification editor. A problem with a Datatype would only be shown in the Problem View. However…

After changing the Datatypes via Studio | Datatype Configuration, the user is forced to perform a validation. If the validation fails, a list of problems is shown that allows the user to jump to the problematic element. In the following screenshot, no “maxLength” has been provided. 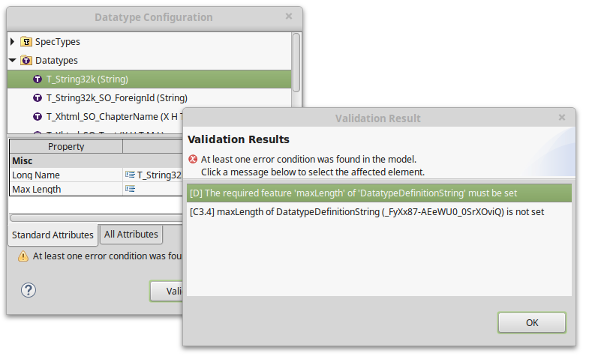 Validation in a few other places

There are validation buttons in other places as well, like in the Presentation Configuration dialog (Studio | Presentation (Plug-in) Configuration). Generally, we tried to ensure that problems will be spotted as early as possible. But even if you missed a problem: a complete validation will be performed upon saving (unless you switched validation-on-save off).

And last, we fixed a lot of little things, sped things up, and made usage easier. This includes new keyboard shortcuts, bug fixes and the like. We hope that these improvements are of use to you.