ReConf is the largest conference on requirements engineering in Europe. Of course, Formal Mind was present, both with a talk and as an exhibitor.  We have already posted a retrospective.

At the same time we supervised a group of students who were participating in the Entrepreneurship Lab of the University of Düsseldorf.  Two of these students joined us at ReConf and surveyed attendees on ReqIF.  Following are some of the results that may be of interest to our readers.

German Alert: As the students produced a report in German, and the charts from the report that are shown here are in German as well.  In the context of this article, their interpretation should be fairly straight forward, even if you don’t speak German.

We recently enabled the ability to leave comments (at the bottom), so please join the discussion. Anonymous posting is possible, no need to sign up if you don’t want to.

Two Out of Three Know RIF/ReqIF 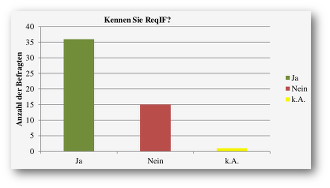 During the two days in Munich, the students managed to interview almost 60 participants regarding their opinions about the Requirements Interchange Format (ReqIF).  As expected most of the respondents were requirements engineers (38%). The rest was a mix of managers, consultants and the like.

We first asked the participants whether they knew RIF or ReqIF.  We included the predecessor format RIF in this survey, as it is very similar to ReqIF and has been around since 2004.  Two thirds of the respondents knew the format (see chart).  Considering that ReConf is a very specialized conference, this was not that surprising and clearly showed that ReqIF is here to stay. 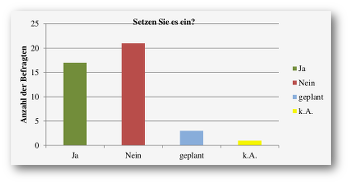 And out of those who knew ReqIF, almost half were actually using it, which is shown in the next chart.

We would have liked to see more respondents planning to use ReqIF (only three said so), and we hope that this does not indicate a stagnation in ReqIF adoption.

People were certainly opinionated about ReqIF, which is shown in the next chart:  Roughly half were satisfied and the other half dissatisfied, with only a few impartial.  This was a bit surprising, so we asked respondents for their reasons. 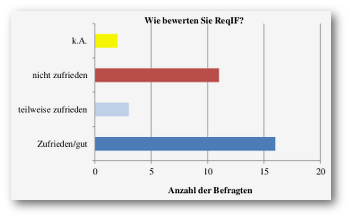 The biggest complaint about ReqIF was its complex XML structure. This is understandable, from our point of view: The schema is not very elegant, and it is “wasteful,” producing a lot of XML for little content.  We were still surprised that people complained about this: Most users will never have to look at the XML, and even with an inefficient XML format, modern computers have no problem handling these amounts of data.

Others complained about ReqIF being “to bureaucratic.”  We suspect that this has less to do with the format itself, but with the exchange process.  Another problem was it being “not practical.”  We assume that this refers mainly to tool-specific ReqIF implementations: Some RIF/ReqIF-Importers and -Exporters have been known for bad performance.

On the positive side, many participants appreciated the fact that an accepted standard had been created in the first place, calling this a large step forward, and the only way to achieve standardization. 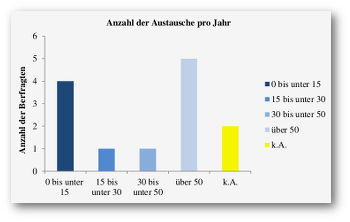 There was a diverse number of responses to problems with ReqIF-based requirements exchange.  Below is the table with the (German) responses, which we clustered into three groups:

The results presented here are of course not completely representative.  Just by visiting ReConf, a pre-selection has been made of people who are experts in requirements and who are interested in new developments and technologies. Recognition of ReqIF in a more general community would doubtless be lower.  Further, ReConf traditionally attracts people from the automotive industry, which had been the initiator of the ReqIF standard.

Nevertheless, this survey gives valuable insights on where ReqIF is, and what has to be done to make it truly successful. It also confirms that the activities in the ProStep Implementor Forum are pushing in the right direction, as they are directly addressing some of the problems cited (Formal Mind is a member of the Implementor Forum, ensuring interoperability of our tools).

This article has been published first on the Formal Mind Blog. Formal Mind is the driver behind the Eclipse Requirements Modeling Framework, the open source reference implementation of ReqIF. We can help you with methods, processes and tooling for ReqIF-based requirements exchange.