If you downloaded RMF/ProR Version 0.6.0, you may have had a problem when using an older Java version (less than Java 7, to be prcise).  We just published a service update that loosens this rather strict and unnecessary requirement.  No need to download the new version, just update via Help | Check for Updates.  This is particularly crucial for Mac users, as it is tricky to get ProR to use Java 7 on a Mac.

ReConf is one of the biggest requirements conferences in Europe, and this year, there will be a lot of buzz around ReqIF.  On the 2. day of the conference, there are four talks around this topic, one of them – Eclipse RMF in Action – from us.  In addition, our science track talk Tool-supported Consistency between Requirements and Specification presents tool support based on ProR.  If you are in Munich, feel free to contact Michael Jastram to meet up.

The ReqIF-Standard allows objects (pictures, OLE-objects, files, etc.) to be embedded in the content.  These elements are stored as separate files.  To transfer the .reqif file and its associated files, they are put into a zip-archive.  At the ProSTEP Implementor Forum it was suggested to use .reqifz as the file ending for such archives.  Until now, these archives had to be created by hand.

Now we added .reqifz-handling as a new feature to ProR Essentials.  It is now possible to import and export .reqifz-Files.  Even if you already have ProR Essentials installed, you need to add the new Transfer feature explicitly.  To do so, select

The following dialog shows a System where all Essentials Features, except the ReqIFz Transfer Feature, are already installed.  To install the Transfer feature as well, select it and continue with the installation process. 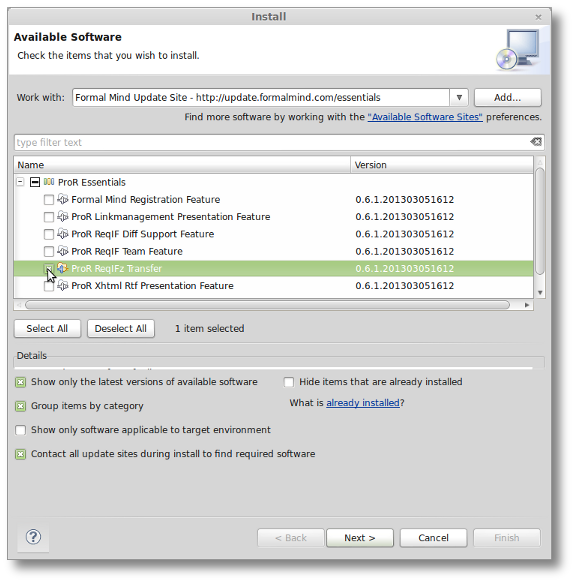 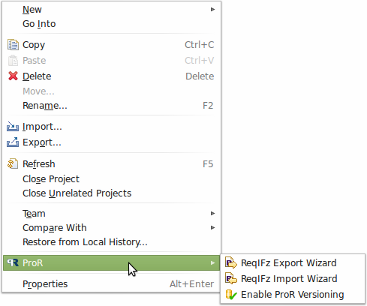 Once installed, the Import and Export facilities of Eclipse contain a new Category ReqIF, containing the ReqIFz Import and Export Wizards.  In addition, the context menu for Projects contains a ProR submenu, which also provides links to the wizards, as shown to the right.

ReqIFz-Imports and -Exports are always associated with a project.  Therefore, we do not recommend to keep unrelated .reqif-Files in one project – it is easy enough to create new projects, as needed.

The export packages the content of the project and creates a .reqifz-file with its content.  It is possible to exclude files from the export.  The wizard also memorizes the name and location of the last export (and warns the user if the file already exists).

The import unzips the content of the selected .reqifz-file into the selected project.  It informs the user, which files would be overwritten.  It is also possible to create a new project on the fly.

If you like to hear about ProR, RMF and requirements on a regular basis, consider subscribing to our newsletter.  We send relevant and useful information once or twice a month.

Research-centric jobs in industry are rare.  Formal Mind provides an environment that gives talented scientists the ability to apply their skills in industry while staying on the cutting edge.  We leave you room to perform active research parallel to doing your day job.  Check out openings >>